If you own a horse, you’ve probably discovered that when you ask different people what is the best hay to feed your horse, you never get a simple, standard reply. There are so many various opinions that people have about what to feed their horse, when their horse should be fed, how much they need and how different types of feed can affect their horse’s behavior and performance. You may have already tried to do some research on the best hay to feed your horse and most likely the more you’ve read, the more confused you become!

One thing we do know is that every horse has different nutritional requirements, since the age of the horse, the activity level, breed and size all play important roles in deciding which hay best suites your horse’s needs. Some horses may require higher protein and more energy, while others may need hay that is lower in protein and is not as rich. For example, a retired senior horse that is turned out in pasture is not going to have the same nutritional requirements as a high-level performance horse during show season. So here is a consolidated overview of some of the differences between hays to help you decide which is the best hay to feed your horse.

Nervous Horse? – It could be a nutritional deficiency

There are quite a few different types of hay that people feed to horses, but hay generally falls into one of two categories – legumes and grasses. Alfalfa hay, sometimes called lucerne hay, is the most popular legume hay fed to horses in the U.S., while timothy and orchard are popular grass hay choices. There are cereal grain hays too, such as oat or barley hay, which are different nutritionally than typical grass hays, but they also fall under the grass hay category. Of course, when trying to select the best hay to feed your horse, geography will play a big part in your selection. For example, alfalfa, timothy and orchard grass hays are popular in Kentucky, while coastal Bermuda grass hay is popular in Southern U.S. Here’s a chart that shows some of the common hays that are fed to horses. 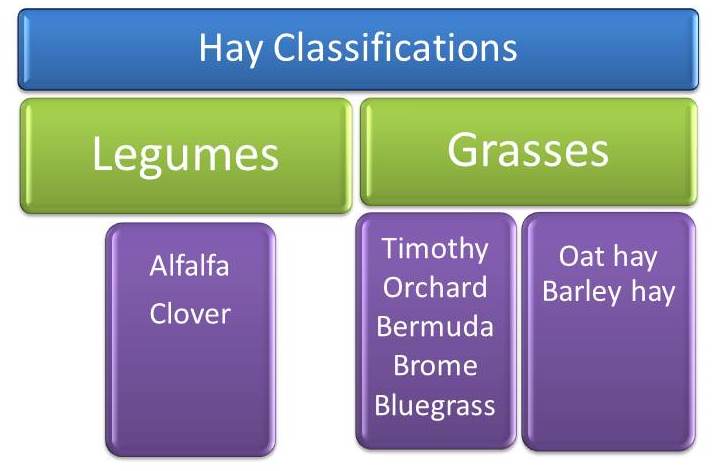 The nutritional profiles of different types of hay can vary considerably, especially when measuring fiber, protein content, digestible energy and mineral composition. To get started, here are some common terms used when evaluating hay:

Moisture: Ideally hay moisture should range between 10% – 17%. Hay that is under 10% may be brittle, dry and dusty. Hay that is over 18% has a high risk of developing mold, and hay over 25% can be a potential fire risk.

Crude Protein (CP): Protein levels in hay can vary widely, depending on the type of hay and when it was harvested. The younger the hay is when it was cut, the higher the protein level will be. Protein levels can range from 8% to 14% in grass hay, and 15% to 22% in legume (alfalfa) hay. In general, a growing horse needs between 12% and 18% protein in their diet for proper growth and development, while most mature horses will do fine on lower protein hay (10% – 12%). Horses that are in training are going to need more protein to support increased muscle development and replace nitrogen that is lost during exercise.

Non-Structural Carbohydrates (NSC): This term is used to describe the sugar and starch content in hay. NSC’s are important, since these are the carbohydrates that are broken down and absorbed into the blood stream as glucose. Horses that are insulin resistant are typically put on low NSC “low-carb” diets.

Calcium (Ca) and Phosphorus (P): The balanced ratio between these two minerals, which varies among different types of hay, is very important because the two work closely together. Ideally, the calcium to phosphorus ratio in horses should be between 3:1 to 1:1. In other words, a horse needs at least as much calcium in his diet as phosphorus, never the reverse. Does your horse need Joint Support?

So now that you know some of the basic terms used, here are some differences between alfalfa hay and grass hay that can help you decide which is the best hay to feed your horse.

Higher Protein Content
One of the biggest differences between alfalfa hay and grass hay is the protein content. On average, alfalfa hay has much higher levels of protein, ranging from 15% to 21% depending on when the alfalfa was cut. This is much higher than the protein levels of grass hay, which typically contains 10% or less protein. While most adult horses need somewhere around 10% to 12% protein in their diet, higher protein is important for young growing horses, working performance horses, and for lactating mares. If a horse is fed hay that contains more protein than they can utilize, the excess will be broken down and the waste will be eliminated in the urine as urea, which is then converted to ammonia. For horses kept in stalls, this could be a problem if the stalls are not properly cleaned and well ventilated.

Higher Energy Content / Lower In Fiber
The energy content is also different between alfalfa and grass hays. Alfalfa hay typically has more calories per pound than grass hay, so if you are feeding your horse alfalfa hay, he may need to consume less hay to maintain his body weight. This difference is related to the fiber content of the hay; alfalfa hay is lower in fiber, while grass hay is higher in fiber which allows the horse to eat more hay without putting on extra weight. For this reason, many people who want to reduce the calorie intake of their horse will feed grass hay instead of feeding alfalfa hay.

Higher Calcium Levels
Another major difference between alfalfa and grass hay is the mineral profile. Alfalfa hay typically has higher levels of calcium when compared to the amount of calcium in grass hay. The phosphorus content, however, usually is not that different between the two hays. And, of course, the mineral content in all hays will vary depending on the region in which it was grown as well as the soil conditions.

Alfalfa hay is very popular since it is readily available and is reasonably priced; it is the only forage that is sold in every state in the U.S. Not only is alfalfa easy to find, but horses also love the taste and almost always prefer the taste of alfalfa over grass hay. This is especially helpful for hard keepers since the sweet smell and green, leafy look of alfalfa hay is hard to resist.

Horses that have Equine Metabolic Syndrome (insulin resistance) and are prone to laminitis may be sensitive to alfalfa, most likely because alfalfa has more sugar and is higher in starch than most grass hays. So if your horse is insulin resistant and you are considering feeding him alfalfa hay, it would be best to discuss this option first with your vet.

So now let’s turn our attention to some of the benefits of grass hay, and how it differs from alfalfa hay. Grass hay has:

Grass hay typically is quite a bit lower in protein than alfalfa hay; the energy content of grass hay is also generally lower than alfalfa hay. For many people who have horses, especially mature horses, non-working horses, or horses that are not used for breeding, grass hay is often preferred over alfalfa hay because of these lower protein and energy levels. Grass hay is also quite often a good choice for senior horses, as it’s easier on the kidneys due to its lower protein content and is also easier to chew and digest.

Grass hay is also a good hay choice for “easy keepers”, meaning horses that easily gain weight or struggle to keep their weight down, especially ponies or miniature horses. Because of the high fiber content, grass hay is a convenient solution for these easy keepers since it can satisfy the horse’s appetite, without adding extra calories and protein.

Here is quick look at some of the more popular grass hays and their typical profiles:

Timothy Hay
Timothy hay is high in fiber and generally is easy to digest. It tends to be more expensive than the other grass hays, but it is also higher in nutrients than other grass hays.

Bermuda Grass Hay
Bermuda grass hay is usually less expensive than timothy or orchard hay. There are some concerns that lower quality bermuda grass hay may cause impaction in horses (discuss this with your vet).

Orchard Grass Hay
Orchard grass hay is not as nutrient sensitive to the time of cutting as the other grass hays, and is also less expensive than timothy hay.

Oat Hay
Oat hay has thick tougher stalks that some horses will not eat. Oat hay tends to be higher in nitrates and also high in sugar (NSC), so this hay is not an option for insulin resistant horses.

Here’s a comparison chart so you can see the differences between alfalfa hay, timothy (grass) hay and oat hay. As you can see, alfalfa hay has much higher protein levels than the other two hays, but is also lower in fiber than the other two. Oat hay, however, has much higher levels of non-structural carbohydrates (NSC) which are the levels of sugar and starch in the hay.

The chart below shows the average calcium levels, phosphorus levels, and calcium to phosphorus (Ca:P) ratio. Alfalfa hay, as illustrated in the chart, typically has much higher calcium levels than the other hays. These are just some of the different types of hay typically fed to horses, along with some of their differences, that hopefully will help you in deciding which is the best hay to feed your horse. If you’d like to learn more about different hays and their typical nutritional profiles, a comprehensive resource to visit is Equi-Analytial.com. And of course, make sure you speak with your equine veterinarian about which hay would be best for your horse based on his own individual nutrient requirements.

Joint Support for your Horse Are you one of the many equine enthusiasts who either loves showing your horse or would like to be able to show your horse? Taking your horse to a horse show can be a lot of fun. It’s a great way to test your skills and continue to work on becoming a better rider. You […] Digestive Aide with Probiotics for your Dog

sweetwaternutrition.com has a Shopper Approved rating of 4.9/5 based on 1116 ratings and reviews

Get Special Offers and Our Blog Posts! These statements have not been evaluated by the Food & Drug Administration and the products are not intended to diagnose, treat, cure, or mitigate any disease.